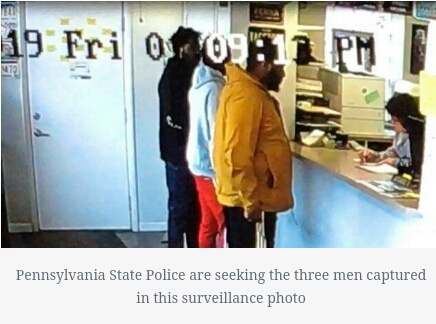 State police are trying to identify three men, who they say used a stolen credit card and false identification to purchase a trailer costing $3,470 from a Derry Township company

The three men then paid cash at the Auto Tag Store in Unity to purchase the temporary tag required to remove the trailer.

On March 11, the trailer company was notified by Discover that the credit card was stolen.

Authorities are still attempting to find out how the men were able to rent a U-Haul pickup truck used to haul the trailer away.

Three men and one woman have been charged with running a prostitution and human trafficking ring out of four massage parlors located in Westmoreland and Allegheny counties.

According to court documents in the case, Hui Xu, of Mount Pleasant, operated four Tokyo Massage Parlors where alleged prostitution was occurring.

Another man identified by authorities as Chang Yu Chen, of Monroeville, would pick up young women at the bus stop travelling from Flushing, NY and transport them to the parlors.

From May 2018 through October 2018, Chen was observed on seven occasions either transporting the young women from the bus stop to a parlor, or moving them from one parlor to another, according  to a criminal complaint

A third man named in court papers as Robert Delano Yerick, of Delmont, transported women from the bus stop to the massage parlors owned by Xu. He performed some odd job and maintenance duties outside the parlors, was a frequent patron of the parlors, and housed some of the young women, requiring them to have sex with him, according to court documents.

All are from China and speak mainly Mandarin.

The four are charged with conspiracy, corrupt organizations, trafficking in individuals, prostitution, and dealing in proceeds of unlawful activities.

A Westmoreland County physician who was indicted last year by a federal grand jury on drug and money laundering charges lost $605,414 to the federal government earlier this month when a federal judge granted a prosecutor’s forfeiture request.

U.S. District Judge Joy Flowers Conti granted the request, ruling that the money was obtained from the sale of illegal drugs.

Mamdouh El-Attrache, 67, is one of three Westmoreland County doctors who were charged last year with prescribing pain medication to patients who did not legitimately need them.

On Oct. 2 Milad Shaker, 49, of Greensburg, was charged with distributing Vicodin, Percocet and Tramado in return for sexual favors provided to him either physically or by text messaging from 2014 through 2017.

Dr. Nabil Jabbour, 67, of Hempfield, was indicted on Sept. 28 with unlawfully dispensing buprenorphine, also known as Suboxone or Subutex, a drug used to treat opioid addiction.

El-Attrache allegedly “routinely accepted cash payments from patients in exchange for illegally prescribing hydrocodone, fentanyl, methadone and buprenorphine outside the usual course of professional practice and not for a legitimate medical purpose,” according to a court document.

Judge Conti said in her ruling that officials will have to wait until El-Attrache’s plea hearing, which is scheduled for June 19, to actually take possession of the funds

A Lower Burrell man is accused of robbing and assaulting a woman late Wednesday and when confronted by police he demanded that officers shoot him.

A caller reported to 911 around 11:30 p.m. that a naked man was assaulting a woman on Leechburg Road, according to police.

Police wrote in a criminal complaint that a witness said Brown yelled and screamed at the woman claiming he knew her from an incident that occurred when he was a child. The woman told police that she did not know Brown and had never met him before Wednesday’s incident. Police said he ripped the woman’s sweatshirt from her and fled the area.

Brown was spotted by police a short time later sitting on the porch of a vacant house and was naked from the waist down, but was wearing the woman’s sweatshirt, police said in the complaint.

As police approached him, Brown yelled “Just shoot me in the back of the head and end it,” then jumped up, kicked in the front door and ran into the empty house.

A short time later Brown complied with police requests and came out of the house and was arrested and handcuffed, the complaint said.

After police put Brown in the back of a police car he kicked and slammed his body into the cage and accused multiple people of molesting him, police said in the complaint.

Brown told police that he had recently smoked PCP, marijuana and meth, according to the complaint. He was taken to Allegheny Valley Hospital in Harrison where he will undergo a mental health evaluation.

The woman suffered scrapes and scratches to her hands and knee. She declined medical attention.

State authorities charged a 75-year-old Jeannette man on Wednesday with possession of child pornography images on his computer.

House is charged with child pornography, dissemination of child sex acts and criminal use of a communication facility

Agents with the attorney general’s office said in a criminal complaint that when Curtis Lamar House was questioned about the images, he told them that be didn’t understand why possession of pornography is illegal.

House told agents that possessing pornography wasn’t illegal “because he didn’t think anyone was getting hurt,” the complaint said.

House downloaded over 30 child pornography images onto his computer by using a peer-to-peer sharing network.  Police were able to determine that House was downloading the images by tracking the IP address used to his home, authorities said in the complaint.

House was being held in the Westmoreland County Prison after he failed to post a $150,000 bond. He is scheduled to appear for an April 18 preliminary hearing.

Vandergrift police have accused a 19-year-old man with assaulting another man and taking his iPhone and $600 early Saturday.

According to the criminal complaint, Lambert and the man were walking on 9th Street between 2 and 3 a.m. when Lambert put his arm around the man’s neck and started choking him.

Police wrote in the complaint that Lambert pushed the man to the ground and repeatedly struck him on his head and face.  Lambert also struck him several times with a handgun and told the man, “I will kill your family if you tell anyone I hit you with a gun.”

Police said that Lambert ran out the back door to his home when they tried to arrest him. Police were able to capture him a short time later.

Lambert remains in the Westmoreland County Prison after failing to post a $30,000 bond. His preliminary hearing is scheduled for later this month.

According to federal authorities overdose deaths in Western Pennsylvania sharply declined last year, but officials vow to continue working to reduce the number of drug-related deaths in the region.

According to data released Friday by U.S. Attorney Scott Brady, overdose deaths are down by 47 percent in Allegheny County between 2017 and 2018, and declined by 50 percent in Beaver and Butler counties. Overdose deaths fell by 44 percent in Washington County and 37 percent in Westmoreland County.

Brady said that aggressive measures in reducing the amount of drugs available have led to the significant reduction in drug-related deaths.

Federal and local law enforcement authorities have been more aggressive in targeting dealers and more federal prosecutors have been hired to go after medical professionals who illegally prescribe opioids.

State police Troop B Capt. Joseph Ruggery said troopers have taken $66 million worth of drugs off Pennsylvania highways in the past year, including nearly 50 pounds of fentanyl in the last three months of 2018.

Brady added that physicians and health care providers are doing a better job of decreasing the amount of narcotics they prescribe.

“On the demand side, our health care and treatment community are doing amazing work,” he said. “EMTs and first responders have saved thousands of lives.”

Bob Jones, special agent in charge of the Pittsburgh FBI office said the lives lost across the region “are far too many.” He added “The FBI is committed to reducing that number, month by month, county by county.”

A UPMC medical clerk admitted in federal court on Wednesday to unlawfully disclosing confidential medical information that she obtained while employed at a Butler County medical office.

Linda Sue Kalina, 61, of Butler, pleaded guilty to one count of wrongful disclosure of health information in violation of the Health Insurance Portability and Accountability Act, or HIPAA.

Kalina admitted to disclosing some of the information she obtained while employed at the UPMC affiliate, Tri Rivers Musculoskeletal in Mars, to persons not authorized to receive the information.

According to court documents, between March 7, 2016 and Aug. 17, 2017, Kalina accessed the confidential files of 113 patients, even though she did not have a valid work-related reason to do so.

She then unlawfully disclosed the protected information on four occasions, including one time in an email to a former employer who had fired her.

Kalina faces up to five years in prison and a $25,000 fine, or both, when she is sentenced in June by U.S. District Judge Arthur Schwab.

A 27-year-old Jeannette woman abused a two-month-old puppy and assaulted her boyfriend on Monday, according to police.

Police alleged in a criminal complaint that they responded to a domestic assault call at the couple’s home on North Fourth Street around 8 p.m. Broker’s boyfriend identified in the complaint as James Krautz, told police that Broker sprayed Lysol in his eyes and slammed a door shut on his hand during the incident.

While Krautz was attempting to get Broker to give him the puppy an argument ensued and Broker started throwing items inside the home, police said.

“The defendant then began grabbing the victim by the neck and sprayed him with Lysol in his eyes and slammed his fingers shut in a bedroom door,” the complaint said.

It is also alleged that Broker threatened to hit Krautz and his mother with an urn that still had the remains of a family member inside it.

During the incident Broker picked up the two-month-old puppy “and stretched its two front legs apart until it started to yelp,” police alleged in the complaint.

Broker was ordered held in the Westmoreland County Prison after failing to post a $5,000 bond and her preliminary hearing is scheduled for March 11.

A preliminary hearing is scheduled March 14.

A Cheswick man is accused of stealing at least $5,000 worth of bongs, vape pens and other products from a Springdale vape store.

Police alleged in a criminal complaint that Brady Glover, 33, threw a cinder block through the front door of Premier Glass and Vape and made off with the numerous items along with $200 in cash.

Police were able to connect Glover with the alleged burglary by his fingerprints and survelliance video.

About 30 minutes after the store’s owner posted photos taken from the store’s surveillance video on Facebook, he received information linking Glover to the incident. The owner then contacted and shared the information with police.

Police also suspect in another burglary that occurred the same night as the alleged vape shop burglary.

Glover is currently in the Allegheny County Jail after failing to post $5,000 bond. His preliminary hearing is scheduled for March 11.