A Pittsburgh man is in jail after police said he walked up to a large crowd waiting to get in the Benedum Center Wednesday night and opened fire with a BB gun. 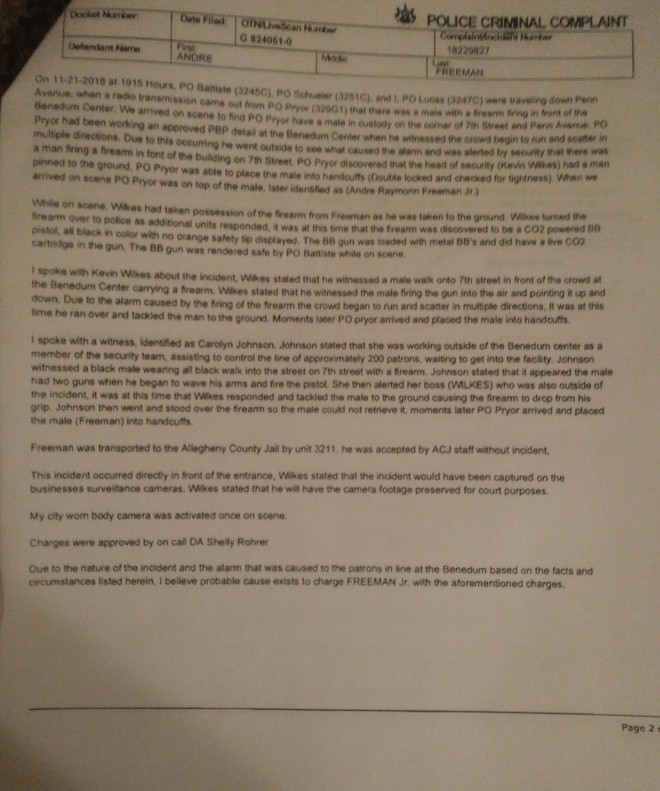 Secutity officer Carolyn Johnson, who was standing near the crowd when she saw Freeman approaching told police that it looked like he “had two guns when he began to wave his arms and fire the pistol,” the complaint said.

Johnson alerted Kevin Wilkes, chief security officer, to the shooting. Wilkes told police “I heard this popping sound, I looked to the left and saw a gentleman with what appeared to be a gun in his hand, and he was walking down the street aiming it toward the area where our guests were located, going inside the Benedum.”

Freeman stopped shooting and started to jog away and  Wilkes caught up with and tackled him at the corner of Penn Avenue and Seventh Street.

As Freeman was tackled he dropped the gun and Johnson kicked it out of the way so he would not be able to retrieve it. Moments later police arrived and arrested Freeman.

Police said the gun looked real, was all black and had the orange tip removed. The pellets would likely break the skin, but not do serious damage.

The Benedum Center is one of several Downtown venues that have increased security in recent weeks in the wake of recent mass shootings.

Freeman is charged with discharging an airgun, carrying a fake firearm, causing or risking catastrophe, simple assault and disorderly conduct. He is being held in the Allegheny County Jail in lieu of posting a $25,000 bond.

He is scheduled to appear for a preliminary hearing on Dec. 3.