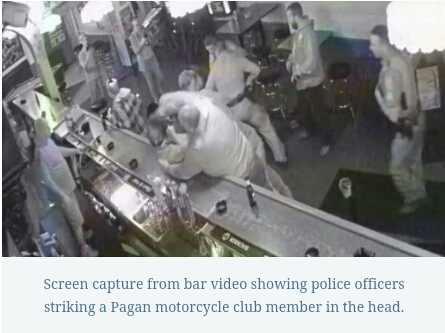 Charges against four members of the Pagans motorcycle club that were involved in an altercation with Pittsburgh police in a South Side bar in October were withdrawn today by prosecutors.

A spokesman for the Allegheny County District Attorney’s Office said in a statement, “This afternoon our office withdrew all charges filed against 4 individuals in the wake of an altercation inside of Kopy’s Bar on October 12, 2018.  The withdrawal of the charges was based on evidentiary reasons and issues and our office reserves the option of refiling.”

The four men named in court papers are; Frank Deluca, 36, of Greenfield; Erik Heitzenrater, 28, of Hampton; Bruce Thomas, 61, of Allentown; and Michael Zokaites, 28, of Shaler.

According to court documents four Pittsburgh police officers were inside the bar in an undercover capacity, posing as construction workers investigating alleged drug trafficking.

Video shows all four officers consuming alcohol for several hours before the Pagans arrived around 11:30 p.m.

While police alleged in a criminal complaint that Deluca started the altercation by shoving one of the officers, bar owner Stephen Kopy, said in a statement that the officers  made statements that they have an “issue with the bikers at the other side of the bar.” Each time, I discouraged them from taking action.”

A video shows one police officer repeatedly striking a Pagan on his head while other officers were holding him against the bar.

DA Stephen J. Zappala said in an Oct. 25 statement that he was troubled by how the detectives acted during the incident.

“We had an issue on the South Side involving an off-duty detail a couple years ago … and there were strikes to somebody’s head,” Zappala said. “I said back then I have a problem with it. You’re not talking about controlling a situation; you’re talking about trying to hurt somebody.”

In a Facebook post the Pittsburgh Department of Public Safety said, “There are three separate independent investigations regarding this incident.  We continue to cooperate with each of them.”

Federal authorities said they have opened an investigation into the incident and lawyers for several of the Pagans said they plan on filing a federal civil rights lawsuit against the officers.