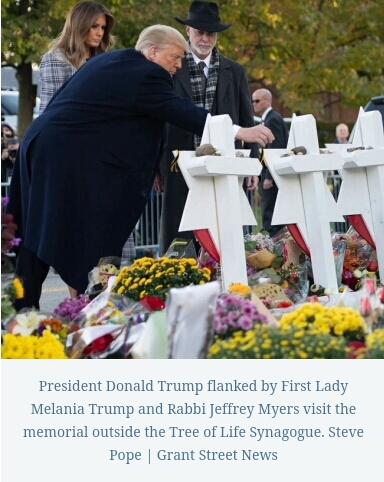 Despite being shunned by local and state leaders, President Donald Trump, First Lady Melania Trump along with the president’s daughter Ivanka, and her husband, Jared Kushner, visited Pittsburgh Tuesday to pay their respects to the victims of Saturday’s deadly synagogue shooting.

Air Force One landed at 3:42 p.m. at the 171st Air Refueling Wing of the Pennsylvania Air National Guard and proceeded immediately to the Tree of Life Synagogue where they were met by Rabbi Jeffrey Myers.

Despite that the inside of the synagogue is still being processed as a crime scene, the president and his entourage were led into the vestibule before returning outside to place stones on each of the 11 Star of David memorials. The president placed a stone at each one, while the first lady placed a white flower.

The president did not make any public statements during his visit to the synagogue.

The president then traveled to UPMC Presbyterian Hospital where he spent a “considerable amount of time” visiting with several of the police officers and others who were injured in the attack, according to Dr. Don Yealy, UPMC Chief of Emergency Medicine.

While most were able to assemble in a room to meet with the president, several were too ill, so Mr. Trump spoke with them in their individual rooms. Some of the first responders and emergency workers who responded to the mass shooting were also on hand and met with the president.

While some media outlets have reported the presence of hundreds of protesters at the synagogue and the hospital, the majority of those in attendance were there in support of the victims.

In a related development, Allegheny County District Attorney Stephen J. Zappala’s request for federal authorities to briefly relinquish custody of shooting suspect Robert Bowers, so that he could be arraigned on the state charges was denied, despite a common pleas judge ‘s order that Bowers be brought to Pittsburgh Municipal Court Tuesday.

“While we are confident that we can move forward with our prosecution, as a practical matter, the circumstances indicate that it is prudent to allow this case to proceed at the federal level at this time. The state charges will remain in abeyance. My office will take all the necessary steps to ensure that the right to a speedy trial is not violated and when pertinent, we will proceed to the appropriate disposition of these charges,” said a DA spokesman in a written statement.

Bowers is scheduled to appear in federal court on Thursday at 10 a.m. for a preliminary hearing.

Also today, a spokesman for Pittsburgh Public Safety provided an update on the police officers injured in the shooting, including their names.

SWAT operator Tim Matson was shot multiple times and remains in critical condition. Officer Daniel Mead, who was one of the first officers on the scene, was shot in the hand and remains hospitalized in stable condition.

The two officers that have been released are SWAT operator Anthony Burke, who was shot in the hand, was released Sunday, and Officer Michael Smidga, who sustained a wound to the head from shrapnel or from being grazed by a bullet, was treated and released Saturday.

Two additional officers were identified Tuesday as being injured in the attack. They are Officer John Persin, who is having hearing issues and Officer Tyler Pashel, who sustained a knee injury. Both have been released from the hospital.