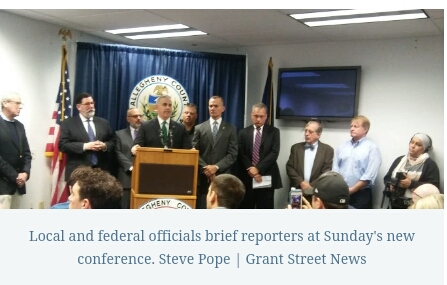 During a Sunday morning news conference state and federal officials presented updated information about Saturday’s shooting at the Tree of Life synagogue in Squirrel Hill that left 11 people dead and six injured, including four police officers.

According to court documents released early Sunday and also at the start of today’s 9 a.m. briefing, the first 911 calls reporting an active shooter situation came in around 9:54  a.m. saying, “gunshots being fired,” according to a criminal complaint filed by a Pittsburgh Police homicide detective.

Almost immediately after arriving on the scene two police officers engaged the accused gunman Robert Bowers in a gun battle in which one officer was shot in the hand and the other injured by flying glass. Bowers then retreated back in to the building, armed with an AR-15 type rifle and three Glock .357 caliber handguns.

A short time later a small contingent of Pittsburgh SWAT entered the building, where another gun battle took place. During this time “they observed that Bowers had shot and killed multiple victims (including 11 in total which consisted of 3 women and 8 male victims)” the complaint reads.

Bowers is reported to be in fair condition and two of his victims, including one of the police officers that was shot, remain in critical condition.

Police pursued Bowers to the third floor, which is when he fired at police a third time, wounding two of them, one critically. During the exchange Bowers was also shot several times.  After a brief period Bowers finally surrendered and was taken into custody.

Pittsburgh Public Safety Director Wendell Hissrich, told reporters Sunday “It’s a very horrific crime scene.  It’s one of the worst that I’ve seen, and I’ve been on some plane crashes. It’s very bad.” He also added that that there was no further threat to the public.

Robert Jones, Special Agent in Charge of the FBI’s Pittsburgh office said worshipers at the synagogue were “brutally murdered by a gunman targeting them simply because of their faith.”  He added that authorities are not aware of Bowers’ motive in the attack authorities believe he acted alone.

“While in custody and receiving medical treatment Bowers made statements to SWAT Operator David Blahut that he wanted all Jews to die and also that they (Jews) were committing genocide to his people,” the complaint said.

Bowers allegedly made similar statements while in police custody, according to an affidavit attached to a criminal complaint filed in federal court and released this morning.

Bowers is reported to have regularly posted anti-Semitic threats and messages on Gab, a website that promotes itself as a place where members are encouraged to make posts that major social networks will not allow.

According to his online Gab profile which has been archived, Bowers joined Gab in January 2018. A post at the top of his profile reads, “jews are the children of satan.”

In a statement released late Saturday, Gab said it was “saddened and disgusted” by the attack, but also vowed to maintain the site and defended its ability to provide a forum where its members can continue to make controversial postings.

In a statement Saturday Attorney General Jeff Sessions said that Bowers could face the death penalty, “These alleged crimes are reprehensible and utterly repugnant to the values of this nation. Accordingly, the Department of Justice will file hate crimes and other criminal charges against the defendant, including charges that could lead to the death penalty.”

Bowers also faces charges in state court that include 11 counts of homicide, six counts each of attempted homicide and aggravated assault and 13 counts of ethnic intimidation.

He is scheduled to be arraigned Monday on the charges in federal court and a future court date has not been scheduled in the state court case.