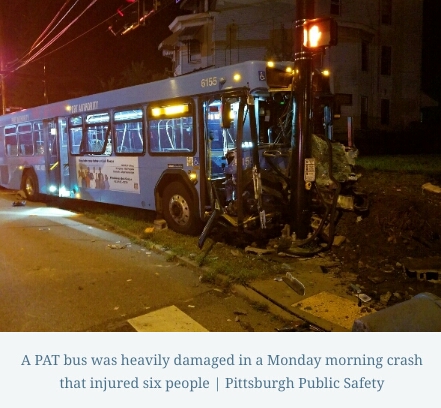 The accident occurred shortly after 1 a.m. at the intersection of Bennet Street and North Dallas Avenue, in the Homewood section of Pittsburgh.

Pittsburgh EMS, Fire and Police, as well as Port Authority Police responded to the scene, according to a Pittsburgh Public Safety Department spokesman.

Emergency workers had to remove the bus driver using the Jaws of Life because of extensive front end damage to the bus.

The bus driver was taken to UPMC Mercy. The four bus passengers and the driver of the SUV were taken to UPMC Presbyterian. Two people sustained minor injuries and three were in moderate condition, according to the spokesman.

Pittsburgh Police Crash Investigation Unit is assisting the Port Authority in the investigation.