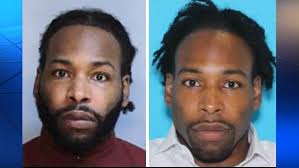 A convicted felon who was wanted in the Aug. 22 strangulation death of a former Playboy model will be heading back to Montgomery County this evening after being arrested as he stepped off a Greyhound bus.

Montgomery County District Attorney Kevin R. Steele announced Wednesday that Jonathan Wesley Harris, 30, of Johnstown, was taken into custody by U.S. Marshals as he got off a bus from Philadelphia.

Detectives with the Lower Merion Twp. police obtained an arrest warrant for Harris on Tuesday charging him with the murder of Christina Kraft. He also faces burglary, robbery and theft charges.

According to online court records, Harris has an extensive criminal past with numerous charges and convictions for assault, robbery and theft. He had just been released from prison in July after serving three years on a robbery conviction.

Police say Ms. Kraft used a popular ride sharing service and met Harris in the Center City section of Philadelphia. The pair returned to her Ardmore apartment around 3 a.m.

Apartment records indicate that the front door of Ms. Kraft’s apartment opened at 3:08 a.m. and the back door was closed at 5:19 am. During this time, police allege a violent struggle occurred in the apartment where Ms. Kraft was beaten, her nose was broken and she was strangled to death.

Police found her body later that evening while conducting a welfare check after a friend had been unable to reach her.

After police released surveillance video and photographs that were obtained during the investigation, a tipster contacted police and identified Harris as the person they were seeking.  The person also said Harris admitted to being with Ms. Kraft at her apartment on the night she was killed.

Photographs of Ms. Kraft have appeared in Playboy, Vanity Fair, Victoria’s Secret and other magazines.