A Natrona Heights woman is charged with endangering the lives of her four children after police found two of them hanging out of a second-story window late Friday.

Deondra Bundy, 30, is charged with four counts each of endangering the welfare of children and recklessly endangering another person.

Police allege in a criminal complaint they were called to the women’s home on Garfield Street around 7:30 p.m. after a neighbor reported seeing the children hanging out the window. When they arrived police saw a broken window, as well as clothing on the ground below. “Officers could also hear an infant child inside the residence screaming.” 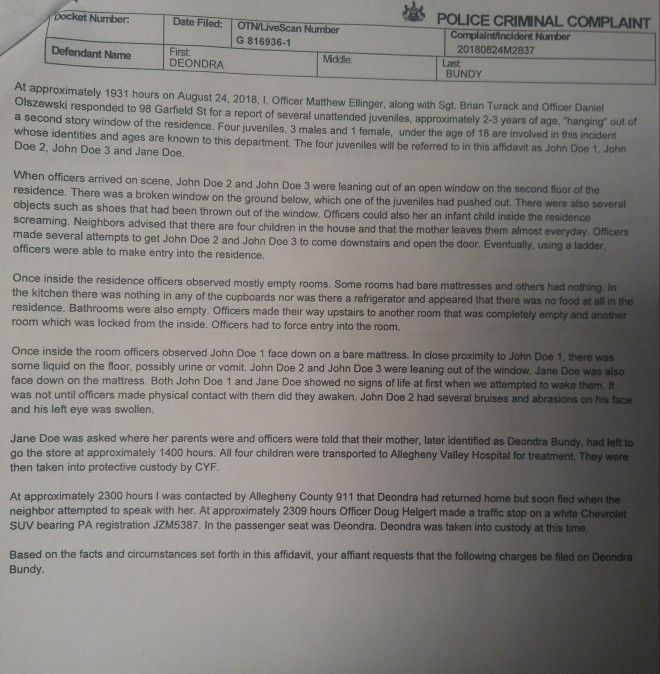 After attempting to get the children to open the door, police entered the apartment through a window using a ladder, the complaint said.

Police found urine or vomit on the floor, no food in the home and two of the children appeared to be sick or injured. One child had a swollen eye and several bruises. Another one, police say, “Showed no signs of life at first when we attempted to wake them.” The child woke up only after an officer made physical contact.

One child told police Bundy had been gone for over five hours after telling her children she was going to the store. Neighbors told police that Bundy leaves them alone every day.

After being checked at a hospital, the four children were placed in the custody of CYF where they will remain pending an investigation.

Around 11 p.m. a neighbor saw Bundy return home and  attempted to speak with her. Bundy immediately ran off, but was arrested a short time later during a traffic stop of a vehicle in which she was a passenger.

She is currently in the Allegheny County Jail after being unable to post a $10,000 bond. Her preliminary hearing is scheduled for Sept. 5 at 1 p.m.