A Pittsburgh man has been charged with the seventh time of accepting thousands of dollars from homeowners for home improvement jobs and disappearing without doing any work.

In the latest case, Pittsburgh Police allege in a criminal complaint that after Charles Lingo, 59, of Verona took close to $3000 from a Pittsburgh woman to remodel her home, he just disappeared and never returned any of her phone or text messages. 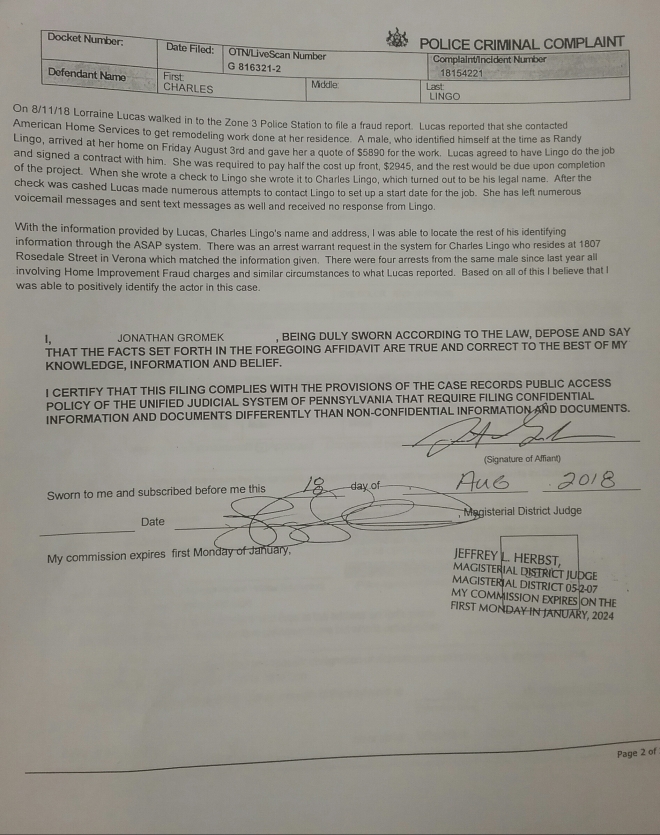 The homeowner identified in the in the complaint as Lorraine Lucas, contacted American Home Services on Aug. 3 to have work performed on her home and was quoted a price of close to $6000 by Mr. Lingo.

Mr. Lingo who told Ms. Lucas his first name was Randy, said he required half the cost in advance, which she paid. Ms. Lucas made her check payable to Charles Lingo.

“After the check was cashed Lucas made numerous attempts to contact Lingo to set up a start date for the job.  She has left numerous voicemail messages and sent text messages as well and received no response from Lingo,” the complaint said.

According to online court records, Lingo has been charged seven times with home improvement fraud, theft by deception, deceptive business practices and theft. He has several pending arrest warrants for failing to show up for court court dates.